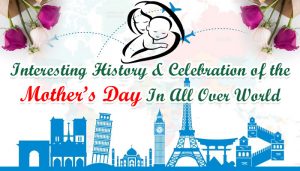 We, human beings are all busy in our lives. But, we never leave a coin upturned when we get to celebrate Mother’s Day. We even go out of our own community and celebrate different festivals around the whole world. Every occasion around the world has a history behind their celebration. Mother’s day is around the corner. Little do we know about the occasion of Mother’s day! Here are the history and the various celebration of Mother’s Day in different parts of the world. 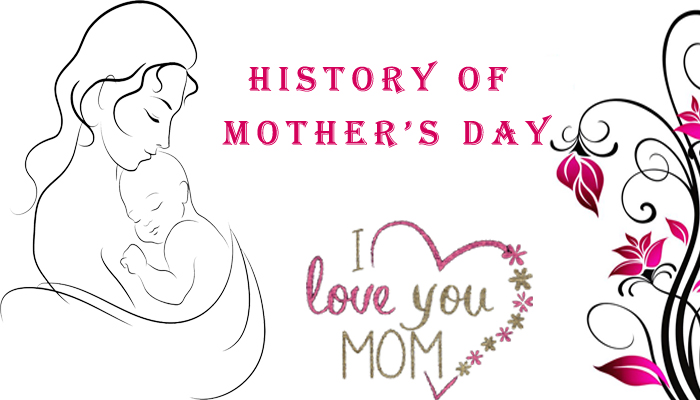 We all see in calendars the holidays are mark as ‘Hall-Mark Holidays’. But the celebration of Mother’s Day started way back than the card company was invented. In 1905, Anna Jarvis’s mother passed away. She determined to tribute her mother along with other mothers around the world. On the second anniversary of her mother’s death in 1906, she held a service in remembrance of her mother at the Church. It was 10th May 1908 that officially started the celebration of Mother’s Day. But back then it was not a holiday.

This day was celebrated with small events in only Philadelphia, where Anne lived, and at West Virginia. Her mother used to teach in the church every Sunday morning. So, she sent 500 carnations as a gift to her mother’s students and asked the boys and girls to wear them. Anna wrote pamphlets and letter with Mother’s Day on it until and unless she drew the attention of the US. And in 1914, the Mother’s Day became an official holiday and since celebrated around the whole world.

1) Mother’s day in the United Kingdom on 31 March

The UK celebrates Mother’s Day on the fourth Sunday of their Lent and calls it ‘Mothering Day’. In the medieval ages, poor families used to send their sons to serve rich families. They used to get a day off during the Lenten season to worship their mothers. So, on this day, the children used to go to the church and pray for their mothers. And then they picked up flowers and gift their mothers. Their surprise was often the cake they baked called Mothering Cake or Simnel Cake. As Lenten had rituals of fasting, this day was express as Refreshment day as well as people used to eat on this day. Today, the UK celebrates Mother’s Day like Americans- with cards, flowers, family meals, and gifts. 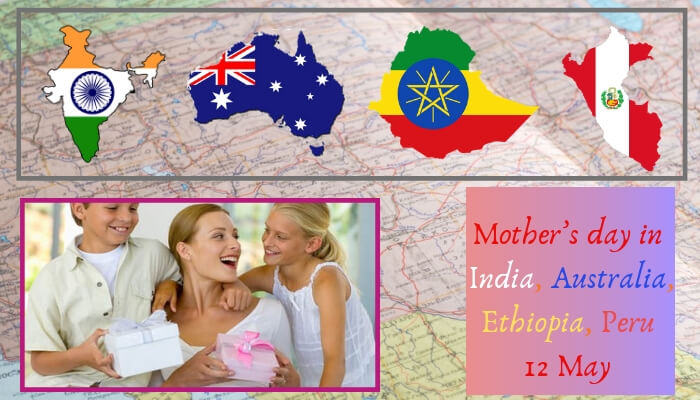 In Australia, the special gift on Mother’s Day is flowers. Carnations and chrysanthemum are giving to mothers, aunts, and grandmothers. Peru has a tradition of celebrating Mother’s Day with kids giving hand-made gifts to their mothers like cards with chocolates. Yet, Peru’s Andean community celebrates Mother’s Day in August. In Ethiopia, the three-day Antrosht festival is celebrate with daughters bringing vegetables and fruits while the men carrying lamb or bull meat. In India celebrate their real Goddess day during the Durga Puja in October. They do celebrate this westernized Mother’s Day in May with showering gifts and love to their mothers. Many order flowers from Mother’s day flowers delivery sites. 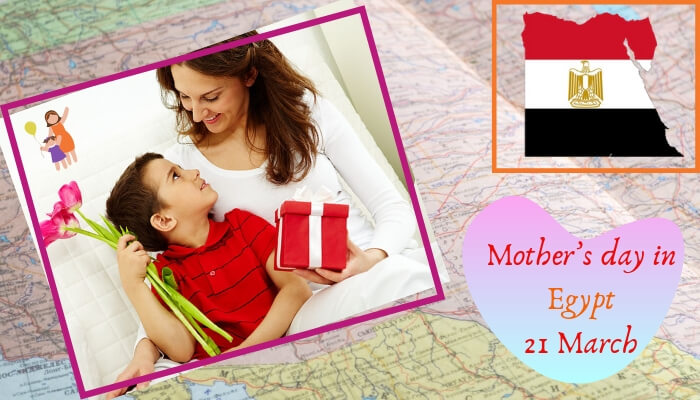 Mother’s Day in Egypt is celebrated on the first day of the Spring season, on 21st March. It is an unofficial holiday in Egypt with celebrations followed by meals and gift basket for mom. 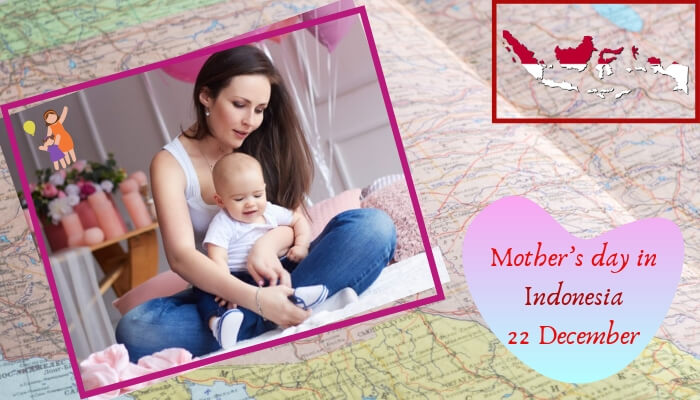 On the anniversary of First Indonesian Women’s Congress, Indonesia celebrates Mother’s Day from 1953 onwards. There is an official holiday on this day in Indonesia. On this day, the Indonesians tribute and celebrate the contributions of the women in their society. The women’s movements by the first woman in the governmental body are celebrate on this day. 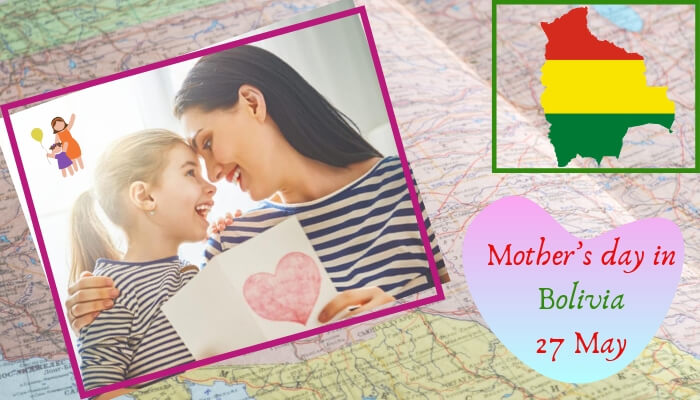 Bolivian men fought when they were fighting their freedom to fight with Spain in the early 19th century. A group of women in Cochabamba stood toe to toe with the men and fought for the country’s freedom on May 27th. They all died and their contribution is still celebrate on 27th May every year. From 1920, this day is officially celebrate as the Mother’s Day in Bolivia. People here send Mother’s Day gift to their motherly figures.

It is important to know the history of the celebration we do as well. Here are the history and tradition of celebrating Mother’s Day at some of the countries.

Mother’s Day Related Blogs You May Like to Read :

Cities We Deliver Mother’s Day Gifts Online in the USA :

Motherhood is so much more than just giving birth to child. And it is truly said mothers are god on earth. Our mother might have been through it all to bring us to the position we are today. She is our best friend and our biggest cheer leader; she is the only person who has […]

It’s Mother’s Day is just a few days or hours and you might have totally forgotten it. If you haven’t planned anything for your then only one option left with you sending your mom lovely gifts for this special day that would help you convey Mother’s Day greetings and love to your mom. If you […]

The most popular and traditional gifts for Mother’s Day are flowers, thus flowers and Mother’s Day have been synonymous since the very beginning. The gesture of greeting mothers with flowers for this special day has never lost its importance or charm. A beautiful flower bouquet will always brighten up her day but it is very […]

We are here with some amazing tips for Mother’s Day this year. You would have given so many thoughts in finding a perfect gift for your mom for Mother’s Day. But if you are unsuccessful in your attempts and need a little inspiration, you are at the right place. According to us Gifts Baskets make […]

Gifts or Flowers are the way of expressing your feelings to your loved ones and they also help you create stronger bonds with them. Sometimes you may not be able to put your feelings in words and here gifts or flowers help you express your emotions and feelings in the most beautiful manner. You can […]

Seven Best Ideas to Celebration of Mother’s Day During Quarantine

Mothers’ day celebration falls every year in May month. Every year you move to a hotel and restaurant and celebrate it to the fullest. 202)’s mothering Sunday is very risky and difficult to celebrate due to Covid-19. You can’t go outside or order food. You have to be at home. But no worries you can […]

All these years your mother has been through enough from giving you birth to raising you during your adolescent years. There’s no better way to repay her for raising you into the person you are today than with a Mother’s Day wine glass. You can raise your glass to celebrate your mom and motherhood with […]

Best Combo of Jewelry and Perfume Gift for Mother’s Day

Mother’s Day is coming and people are going to search for the best gift for there mother. There are various gifts are available in the market but currently. The trends are change and people like to give something extraordinary. A combination of gifts is one of the new trends which is currently going on. There […]

Mother’s Day provides an excellent opportunity to show your mom how much you love and care about her. This is the day when you can put in all the creativity and talent you have in choosing gifts and surprises for your mom. For this special day you can choose gifts that will make her feel […]

Awesome and Memorable Personalized Gift Ideas for your Dashing Mommy

A mother has a very special place in her child’s heart. No matter how old you grow, your mother’s love never changes. Whether it is protecting, pampering, loving, or coddling no one can do it better than your mom! Kids see mothers as creators as they can do everything and anything. So, it is so […]